About the Chief Engineer 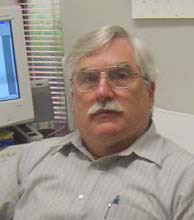 I'm told by my parents and relatives that I always had a fascination with trains.  My grandparents on my mother's side lived in a small wooden house in Ponchatoula, Louisiana within eyesight of the Illinois Central's mainline running between Chicago and New Orleans.  As a small kid, I remember the shiny orange and brown streamliners racing by, and the rumbling freight trains...some pulled by black, utilitarian looking machines (Geeps), and others by fire-breathing, smoke-belching monsters.  I was witnessing the last of mainline steam, but (at that time) was more interested in those shiny streamliners!  Frankly, those black, smoky monsters just scared the tar out of me, at least when up close.

For models, it all began for me in the early 50s.  I received an O scale toy train set for Christmas...don't recollect the make, but that wasn't important back then.  All I knew is that it ran fast, and had action accessories, and was amazing.  Eventually the set was packed away, and I happily went along my way, being distracted by other wonderful things: Remco toys including an electronic radio station, the Bulldog motorized tank, and a ray gun.  Then there was a flying rocket model (propelled by baking soda and water), and of course, Hula-Hoops.

In 1960 at age 12, I had my next encounter with model railroads.  Set up beneath the Christmas tree was a Revell HO scale train set, powered by an 0-6-0 saddle tank steam locomotive.  This engine was ahead of its time in HO, as it had (in addition to a working headlight) a smoke generator, and SOUND!  The chuffs were provided by tiny bee-bees in a spring buffered plastic box that was activated by a cam on one of the drivers, shaking the box back and forth.  Truly unique at the time.

I was hooked!  And I've been an HO scale modeler ever since.  I've built several layouts over the years, usually in spare bedrooms.  Most were never completely finished (usually due to moves).  Though there have been extended periods over the years when I wasn't actually modeling, I've always tried to keep up with the hobby with my reading, experimenting, and by operating with friends at their layouts.  Oh, and did I mention G scale?

On the prototype side of things, I have spent a significant amount of time track side over the years.  I've railfanned lines over a fairly sizable portion of the country, and even spent a short while employed as a brakeman on the Texas and Pacific back in the early 70s.  My love has always been with the shortlines I've ferreted out over the years, and the Louisiana Central was (and is) just one such of those lines.

The Louisiana Central for today and the future, will incorporate both old and new ideas and technologies.  I don't forsake the old stuff just because something is newer.  But I do intend to update some of my materials and methods on this layout.

My intent is to chronicle the construction, and later, the operation of the line through these web pages.